I love soccer. It’s my favourite sport. I would love to play on the Canadian Women’s National team, but if I were to make it on that team I would want to be treated the same as the men’s team. Women who dedicate their lives to this sport are playing on bad quality fields, getting paid significantly less than the men, and just aren’t being treated fair.

The total prize pool for the Women’s World Cup tournament was $15 million. Of that, the US women’s national team took home $2 million for their victory. That’s less than a quarter of the $9 million the US men’s team got last year for getting knocked out in the first round. The total prize pool for the men’s tournament was a whole $576 million — 40 times more than what the women received. The women got first and were paid less than the men who were knocked out in the second round. How is this supposed to be fair?

The American men and women are required to play twenty friendly games throughout the year. The women earn $1,350 per game, bonus if they win, and nothing less for a loss or tie. The men, on the other hand, earn a minimum of $5,000 per played game, regardless of the outcome. If they tie or defeat their opponent, they can earn anywhere between $6,250 and $17,625 per game, depending on the other team’s rank. This is unbelievable, and about time, someone takes a stand for the women. Thankfully, five members of the american women’s national team did.

USWNT co-captains Carli Lloyd and Becky Sauerbrunn, Alex Morgan, Hope Solo, and Megan Rapinoe — who all played key roles in the team’s in the world cup, are filing the lawsuit with Equal Employment Opportunity Commission. “I think the timing is right,” Lloyd said. “I think that we’ve proven our worth over the years. Just coming off of a World Cup win, the pay disparity between the men and women is just too large. And we want to continue to fight.” These players will continue to fight for equal payment because it’s getting out of hand.

In conclusion, the fact that the USWNT won the world cup and were still paid less than the men who were out in the second round is a huge issue that will hopefully be solved in the coming months. Both teams work the same amount, train as hard as each other and both love the beautiful game. It is only fair that men and women who dedicate their lives to soccer are paid the same amount. 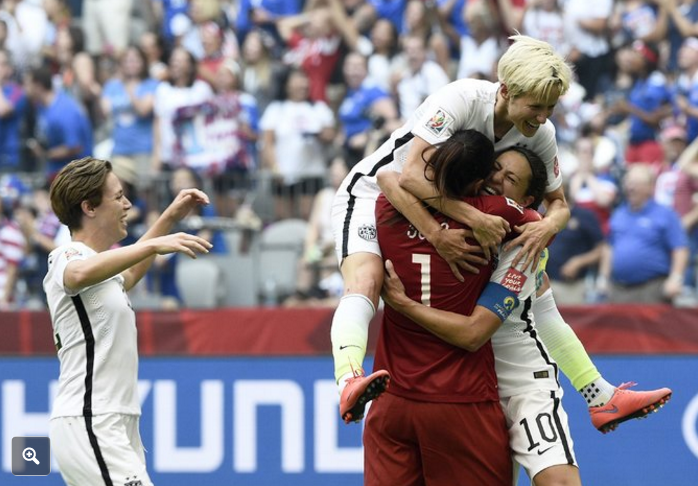