In 1977, Terry got cancer in his leg and his hard and painful  life began.

When he was at the hospital one day he was reading a magazine with a man that did pretty much the same thing as Terry. That is what inspired him to run.

When he first started the marathon across Canada in 1980 people thought he was crazy. But then people started realizing that he was doing it for a good cause.

During the marathon Terry had a meal like this:

He needed this kind of food so he had more calories.

What I think is very encouraging is that he would always be brave, courageous and a leader.

Sometimes when I get stuck in problems I think of people like Terry, who had a harder life and it reminded me that my problems wont be as bad as that. 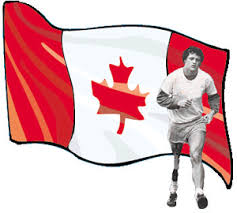 If you participate in the Terry Fox Run  great! When Terry ran across Canada, it was called the Marathon of Hope.

If you don’t you should.

It’s a time to have fun and raise money for cancer research.

4 thoughts on “Who was Terry Fox?”